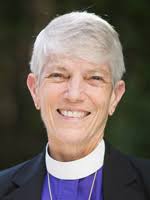 The Rt. Rev. Mary D. Glasspool came to the Diocese of New York as Assistant Bishop in April, 2016. Previously she had been Suffragan Bishop of Los Angeles (elected December 2009, consecrated May 2010). She was born on Staten Island, raised in Goshen, NY, where her father, Douglas Murray Glasspool, served as rector of St. James’ Church until his death in 1989, and graduated Bachelor of Arts Magna cum Laude from Dickinson College, Carlisle, PA in 1976; earned her Master of Divinity from Episcopal Divinity School, Cambridge, MA in 1981; was ordained a deacon in June 1981 by Bishop Paul Moore, Jr. of New York; and in March 1982 was ordained a priest by Bishop Lyman Ogilby of Pennsylvania.  From 1981 to 1984, she served as assistant to the rector, and later interim priest-in-charge, of St. Paul’s Church, Philadelphia, moving from there to be rector of St. Luke’s and St. Margaret’s Church, Boston, where she remained until 1992. She then moved to the Diocese of Maryland, first as rector of St. Margaret’s Church in Annapolis (1992-2001) and then, until her election in 2009 as suffragan bishop of Los Angeles, as Canon to the Bishops in the diocese.